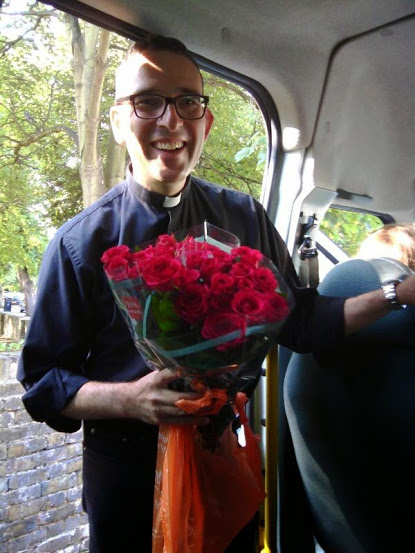 From the under 10s to the under 90s there were pilgrims from every decade represented in the group of 30 parishioners who travelled to St Alban’s on the weekend of 21-22nd June to take part in the Alban Pilgrimage 2014, celebrating the life and death of Alban, patron saint of the City and Britain’s first saint, and then to be welcomed and hosted by the Vicar and parishioners of St Mary’s, Redbourn nearby.

The official pilgrimage events began with an extraordinary parade from St Peter’s parish church, along the (busy Saturday morning) high street, past the Town Hall, and finally to the Abbey itself. Hundreds of pilgrims took part in this parade ranging from puppets (20 foot tall) representing characters from the story of Alban’s martyrdom; children in magical costumes, representing roses, (the official emblem of the City – red for Alban’s blood); blue flowers, representing the rose window in the Abbey; flowing lengths of blue fabric, representing the flow of water from the well that sprang up to quench Alban’s thirst; a marching band; and many, many flag waving groups of people representing most of the parishes in the diocese of St Alban’s, parishioners from other St Alban’s parishes (which included us of course); representatives of charities, uniformed organisations, voluntary groups, civic societies, and ordinary members of the public. Progress along the route was punctuated by brief enactments of Alban’s Arrest, Alban’s Trial and finally, outside the entrance of the great west door of the Cathedral, Alban’s Death.

The parade was followed by a Festival Eucharist, at which the Most Rev Katherine Jefferts Schori, presiding bishop of the Episcopal Church, USA preached. Having delivered greetings from the 82 churches dedicated to St Alban in the USA, she spoke movingly and motivatingly about heroes. Who is a hero? Someone who is a protector, a defender, who will “spend” themselves for others, who will live fully by responding to persecution of another, who isn’t afraid of dying, but who is afraid of not living well

After the service there was a free afternoon for picnics on the grass, some football/cricket games, a snooze for some, a browse in the Cathedral book shop for others, until the Festival Evensong, presided over by the Dean, the Very Rev Jeffrey John at which the preacher was John Bell from the Iona Community. His theme was also heroes – he was keen to rescue the idea of being a hero from being only applicable to other (famous) people. We can all be a hero if we are happy to work for justice, fight injustice and show compassion. This service, like the Eucharist, was packed. Well-placed television screens meant all could see what was happening, however far away you were seated – the Cathedral boasts the longest nave in Europe. Finally the whole congregation followed the clergy and choir in procession past the Nave Altar, through the Screen, on into the Shrine of Saint Alban, where the hundreds of red roses people had brought with them were gently placed on the floor all around, and out into the continuing bright sunshine to the sound of a joyful peal of bells.

So ended the official Alban Pilgrimage 2014, but not our parish pilgrimage. We adjourned to a restaurant for merry pizza and glass of wine before continuing a few miles north up the Roman road of Watling Street where we dispersed to our overnight accommodation - some in a hotel and some as guests of St Mary’s, Redbourn parishioners.

Sunday morning began with Parish Eucharist at 9.30am taken by their Vicar, the Rev Will Gibbs, who is a longstanding friend (and cricketing pal) of Joe’s and whose welcome to us all was exceptionally warm and friendly. After the service there was time for a leisurely stroll round the village of Redbourn before a delicious buffet lunch in the hall – or rather, in the sunbathed, rose-scented neatly mown churchyard.
By 3pm on Sunday afternoon we were safely back in Teddington having had a wonderful weekend of many new experiences and having made new discoveries, new friends and maybe new resolutions. It was a privilege and a delight to be part of it.