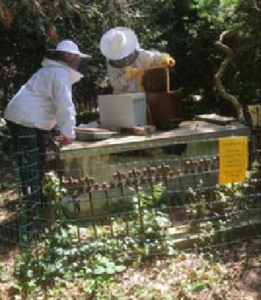 Who has seen a hedgehog in Teddington in the last 20 years? During the last year the Holy Gardeners have significantly tidied the St. Mary with St. Alban churchyard area, allowing the old Georgian and Victorian gravestones to become more visible but without losing the wild graveyard appearance. We have a strategy to improve the variety of wild flowers and animal life, including the setting up of a couple of refuge areas for smaller creatures. 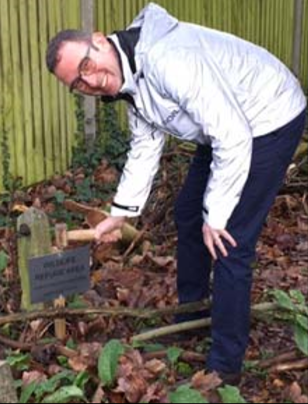 Bees have now been introduced to further this strategy.  Perhaps, with some funding, we can banish the gaps in the hedge caused by the box tree caterpillars. Our strategy says that replacement shrubs should be bee friendly as well as hedge worthy. The bees are in a small hive called a Nuc (Nucleus). On their first inspection they seem to have settled in well and are holding their own.

Claudie Godet, of this parish, is the beekeeper in charge and will be inspecting them regularly, but not if it’s raining. The bees don’t like it!

Parishioner Tony Shaw says: "The PCC is now considering a proper plan for maintenance of the churchyard over the next five years. This will include improving the flower bed next to the church wall on the south side and development of the big bed by the west door, previously constructed so well by Cyril Shaw, as well as further tidying of the lower end."