Research based on a recently discovered document on the history of St. Alban’s has highlighted many fascinating and renowned residents in Victorian Teddington. Here are two who had connections to St. Mary’s, writes Sue Stevens. 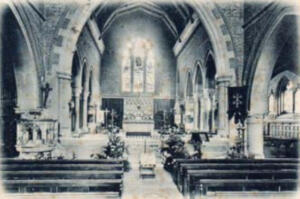 The Rev. Daniel Trinder was Vicar of St. Mary’s from 1857-78. He was a vigorous parish priest and noted preacher. He was also a man of vision, who realised that the growing population of Teddington would need another church, so St. Peter and St. Paul’s (photo) was conceived. It was more ‘High Church’ than St. Mary’s. Apparently some parishioners disliked this and founded a third place of worship, Christ Church. Rev. Trinder did indeed follow High Church traditions, and in the early 1860s had mud and stones thrown at him with cries of ‘No popery’. He was also a keen cricketer and was President of Teddington Cricket Club for many years until he left the parish in 1878. 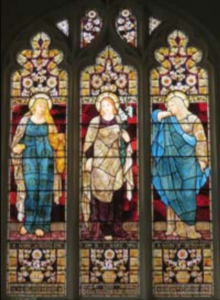 Other noted Teddington residents were the Chinnery family. In 1871 Henry and his brother, William were living at Oxford Villas in the High Street, both working as stockbrokers. We have to thank William Chinnery for the window at the west end of St. Mary’s, a memorial to his young wife, Mary, who died in childbirth in 1880.

His brother Henry was equally generous to the church, and Henry’s obituary in the Bicester Herald in 1914 said ‘When he first went to Teddington he was a regular worshipper at the little church of St. Mary’s. Later when things went well for him he combined with others to raise the income of the benefice, besides being a generous supporter of other parochial charities’. He gave at least £20,000 to fund the building of St. Alban’s, (about £1.5m today). He was a nationally renowned sporting hero being a top boxer and athlete.

William was also a well-known athlete, as well as a highly respected chess player, whose games are still available to watch on the Net. Henry was instrumental in the founding of Teddington Studios as he allowed filmmakers to use the greenhouse of his riverside property, Weir House as a studio in the 1880s. This was the site for later development of the Studios.