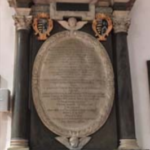 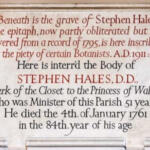 Robin Field-Smith writes: "Black Lives Matter has focused attention on statues and memorials found in public spaces. Churches often contain many of the latter, and here in St Mary’s we have over forty, covering some four hundred years of village life. Our Church Recording project, due to finish in a few months, has captured details of them all, which has helped us check if any of them might cause concern or even offence. There are some notable figures commemorated, of whom the following merit a mention.

"Thomas Traherne was briefly curate around 1670 and his religious poetry is now popular. He was chaplain to Sir Orlando Bridgeman, a great royalist, who supported evangelical work with Native Americans and helped clarify processes for transfer of property.

"John Walter founded The Times newspaper, and successfully challenged the Church of England in the High Court to stop the practice of charging for the use of pews – and then leaving them unoccupied. Shortly afterwards he was elected Churchwarden.

"Stephen Hales, along with being the resident priest for nearly fifty years, is a famous scientist, respected across the
world. Apart from leading and providing most of the funding for the 18th Century ‘Building Anew’ project, he campaigned against the abuse of gin, and was one of the Trustees for the Establishment of the colony of Georgia, in North America, where slavery was prohibited.

"All in all we have forebears of whom we can be proud, and many of them invested in the Church and Parish."