Grenfell Tower: the response from The Church of England 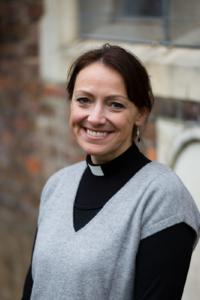 Unable to get over on Wednesday and Thursday, I was kept up to date by friends who live within sight of Grenfell, by social media and by emails to all the clergy in the area. It was clear to me that the churches were really stepping up, offering donation space, food, clothes and water etc. On Thursday, all the clergy received an email from our bishop (Graham Tomlin) suggesting that if possible we should put on our dog-collars and walk through the streets, offering a listening ear and prayer for those who wanted it. He said that people were keen to talk.

On Friday, I made it over to North Kensington and was quite taken aback by what I found. As I wandered about, locals grabbed my arm often accompanied by the words, “excuse me, vicar” and began to share stories and ask me what church I was from. One man whose friend had died in the fire wanted to show me the photographs he has taken of his harrowing night. His need for me to look in depth at every single photograph (there were hundreds) was understandably very great. Another friend joined him and began to tell me about the sound of bodies falling from the tower, and how one man had fallen to the ground under the weight of catching a baby from a great height. I listened, with no response other than tears which I shed with their tears. I felt a funny mixture of sadness and anger at what they had experienced, whilst also being extremely glad to be there with them.

At one point, a woman spotted my collar and started thanking me for being part of a group of people whom she identified as being those who were standing with the community. She was extremely angry about the response of the local council and said, “you Christians have really stood by us and done what they should have done.” I felt really ‘proud,’ if that’s the right word, to be counted with those who stand by the ones who are suffering. Also, proud of my church; the CofE is a body of people, and like any body of people, sometimes we make mistakes, but this time, it was clear we were really getting it “right.”

I really cannot do justice to the conversations and encounters; whether they were volunteers from afar or locals, the response to me in my collar was the same: people wanted to be held and to be heard. No one asked me for anything else, and in many ways compared to the people who were offering out free food and water etc. I was really only being present.

However, it was so clear that in addition to these other basic needs, the presence of the Church was, and is, vital. A presence that is not related to the past few days, but in fact dates back for centuries, embodied in buildings which are landmarks to many. For the people I spoke to, and I realise others might have felt differently, the Church symbolised a body of people who cared about the injustice they had suffered and would stand by them. They saw the Church not undermining their suffering with trite supplications, but rather standing with them and asking for answers.

On Friday evening, a service was held at St Peter’s in Notting Hill with the purpose of praying for and lamenting with the community. Christians gathered together to cry out to God; to mourn with those who mourn. There was no attempt to offer answers, as none would be good enough for a tragedy of this magnitude. Bishop Graham offered his reflection on the experience of the past few days, not shying away from the reality of the situation; he spoke of being with a family as they received the news that their child had died in the fire, (for his message, see http://grahamtomlin.blogspot.co.uk). He noted the various moves through shock, compassion, grief, anger, and the need for hope. Again, as I looked around the full church, I felt a sense that what we were doing in providing a public space for lament and prayer, was really very important.

Going over again yesterday, I was struck by the subdued anger that rippled through the streets. People still wanted to talk, and were still very grateful, but they were also extremely angry. Quite so! I felt very aware of the need for safe ways to express anger and also that our response to the anger is so crucial. I was very pleased to see Bishop Graham yesterday as he gathered together a group of survivors, and went with them to Downing Street to tell their stories. This is how the CofE should be known. There are some very big questions of justice here, and I’m so glad that the Church has not shied away from them. And if we are to be faithful to Christ’s call, we must continue to ask the difficult questions.

Whilst of course, we must celebrate the incredible outpouring of compassion which has been visible on the streets, it is vital we allow a space for those who are angry and mourning, to be angry and to mourn. For those who have lost everything need a space to ask the questions, to name the injustices and to shout out to God. I recalled Psalm 88, and I could not help but wonder if we need a season, even if only a short season, where Psalm 88 guides our prayers. For what’s significant about Psalm 88 is that it does not resolve itself in quite the same way as the other psalms. The psalmist closes the psalm despondently because in his particular situation, it’s the only adequate response. Of course it comes in a body of psalms which ultimately end hopefully; nevertheless the psalmist sees fit to close this psalm unhappily. I’ve always been grateful for Psalm 88 when times are tough. I’m not saying that we don’t need hope, or that we should not be preaching a message of hope, because we know that through the resurrection, death is not the end of the Christian story. Of course we preach hope. At the same time, the Bible does provide us with rich resources to draw upon in times such as these, resources such as the book of Lamentations, Job and the Psalms; resources which give us words with which to cry out to God when we do not have words of our own. It also shows us that there is a need sometimes to allow people to experience pain, knowing that God is with us in it.

Looking forward, we need to make sure that we continue to stand firmly beside those who will be attempting to rebuild devastated lives; whether we do that in prayer and/or financially, it is clear that support will be needed for more than these acute first few days. Our God is the God of everlasting faithfulness and our goal must be to embody the same steadfastness towards those who need it, especially steadfastness in our campaigning to make sure that this type of disaster never reoccurs. As we have been doing for centuries, Lord, we cry together, “Thy Kingdom Come.