As reported in the Church Times and by the BBC recently, there is a humanitarian crisis in Northern Mozambique, home to our link parish of Pemba, as growing numbers of people have lost their homes amid escalating conflict. The local church is attempting to support 130 households that are looking after refugees, at a cost of £12,000 for three months.

This is a real emergency. The Emergency Appeal for Mozambique is our Parish Lent Appeal this year and we have so far raised £10,109. Please keep the donations coming in so that we can get as near as possible to the £12,000 target.

Donate via the link above or send a cheque (payable to PCC of St Mary with St Alban) to the parish office.

All funds raised will be transferred to MANNA, the UK charity supporting the Anglican churches in Mozambique whose trustees include our own Joe Moffatt and Sarah Rae. MANNA are running a Cabo Delgado Emergency Appeal which will ensure that funds get to where they need to be as quickly as possible.

Several of us attended a zoom meeting on January 14th with Bishop Manuel, who visited Teddington a few years ago. He told us of the struggles that they are all facing. 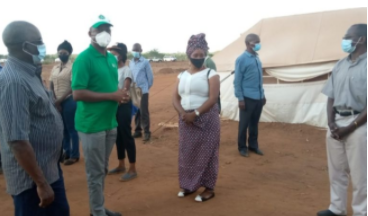 Families as well as orphaned children need support - the bare essentials, food and hygiene goods. The camps are overcrowded and there is a lack of access to clean water and sanitization. This is leading to illness and outbreaks of cholera.

The Diocese of Nampula is working with the displaced in host communities and in camps to support their needs. Muassite Miguel, who also visited Teddington in 2019, heads the community development work for the diocese.

Bishop Manuel gave us an update on the work being done as a result of our 2020 Lent Appeal:

So we thank God for these developments, and pray that our donations this year can help to relieve the suffering of all those who have had to flee their homes.